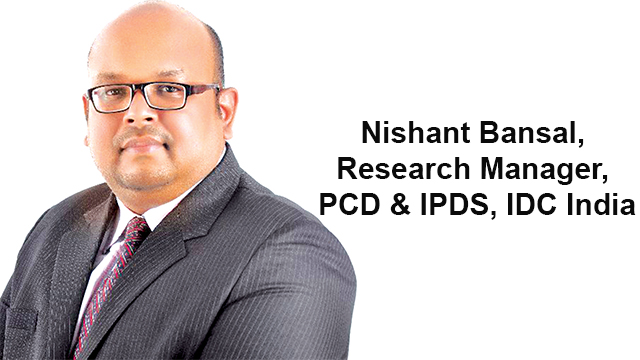 Despite a slowdown in demand, Inkjet printer shipments grew YoY by 5.6 percent led primarily by Epson. The growth was led by Ink tank printers which recorded YoY growth of 21.2 percent, the highest growth in the last 5 quarters.

India HCP market posted quarterly shipments of 0.85 million units in 2019Q1, with a decline of 4.1 percent on a year-on-year (YoY) basis, as per the latest IDC’s Asia/Pacific Quarterly Hardcopy Peripherals Tracker, CY2019Q1. The decline was primarily because of the slowdown in both consumer and commercial demand.

Despite a slowdown in demand, Inkjet printer shipments grew YoY by 5.6 percent led primarily by Epson. The growth was led by Ink tank printers which recorded YoY growth of 21.2 percent, the highest growth in the last 5 quarters. While the overall laser printer market declined YoY by 11.9 percent, the copier segment grew by 19.4 percent YoY and recorded the highest shipment ever. The copier market grew on the back of strong demand from government and government’s continued tight monitoring of the refurbished copier market.

“Weak consumer demand, observed in 2018Q4, continued well up to the middle of 2019Q1 as well and this largely affected the overall Inkjet market’s health. Demand from SMBs and SOHOs was also on the lower side due to the credit issues they continue to face with banks affecting demand for laser printers. Despite the scheduled government elections, the consumption from the Government remained steady, owing to it being the last quarter of the financial year. After the election dates were announced on March 10, 2019, with the Model Code of Conduct coming into effect, government demand decreased as multiple Government deals were put on hold,” says Bani Johri, Market Analyst, IPDS, IDC India.

Top 3 Brands
HP Inc. (Excluding Samsung) maintained its leadership in the HCP market with a share of 37.7 percent while its shipment declined by 7.6 percent YoY. The decline was primarily led by the inkjet segment, which declined by 11.6 percent YoY, due to muted demand from the consumer market even though multiple end-user and channel schemes were active. In the inkjet segment, HP retained its 2nd position with a share of 24.6 percent. On the Copier side, HP shipments grew by 15.7 percent quarter over quarter due to strong demand from the corporate and Government segment. In the Laser segment (excluding Copiers) HP maintained its leadership position, capturing more than 60 percent of the market share. 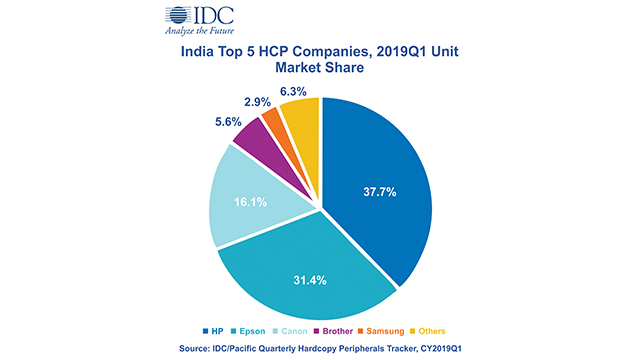 Epson remained at 2nd position in the overall HCP market by clocking 13.1 percent YoY growth and capturing 31.4 percent of the unit market share. It also continued to hold its leadership position in the inkjet segment while increasing its unit market share to 56.1 percent, thus increasing by 11.6 percentage points. The growth came primarily on the back of its new models, especially L3110 and L3150, along with multiple lucrative distributor schemes. Epson’s gains were mainly due to SMBs are preferring ink tank over expensive laser printers as it remains the preferred choice in commercial segment when it comes to ink tank printers.

Canon recorded year on year decline of 10.5 percent while maintaining its 3rd position in the HCP market and capturing 16.1 percent unit market share. The decline in Canon’s shipment was largely due to inventory correction exercise undertaken due to the excessive stockpile in previous quarters. In the copier segment, it continued to lead the market with 24.0 percent unit market share. The Government’s stricter regulations on the refurbished market coupled with increased demand from Government helped Canon in maintaining its dominance in the copier market.

Epson India Retains No.1 Position in the Indian...