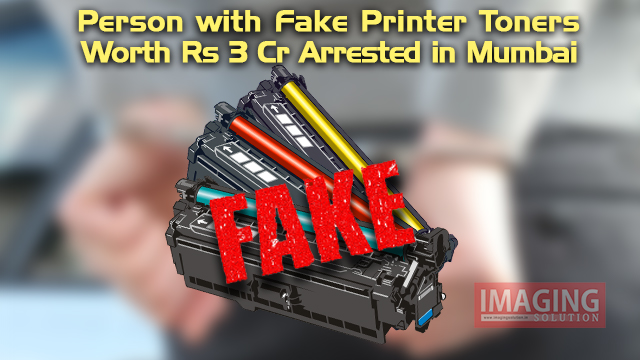 As reported by the Times of India, fake printer toner powders worth Rs 3 Cr were seized in a raid at a godown in Goregaon, Mumbai, and the dealer of the products was arrested. Acting on a tip-off, crime branch officials raided the godown at Motilal Nagar and seized the fake cartridges and toners. The police arrested Vipul Dharmsi Sandha (32), a resident of Malad. He has been booked under the IPC sections of cheating, forgery, and copyright act. According to reports, the arrested accused has confessed to such duplicates in the past too. The fake printer consumables have become a big menace in the market causing a loss of crores of rupees each year to the OEMs and the providers of compatibles.

It is very difficult to differentiate original toners and fake toners by an average user. Taking advantage of this subtlety, criminals are selling fakes where they make a big profit. These fakes are causing a lot of trouble to the providers of genuine products who are already suffering from lockdowns, shrinking margins, etc. All the players in the imaging industry need to be vigilant and fight together to stop this disease in the market. Imaging Solution magazine is always with the imaging aftermarket industry and its players to defend and support them.