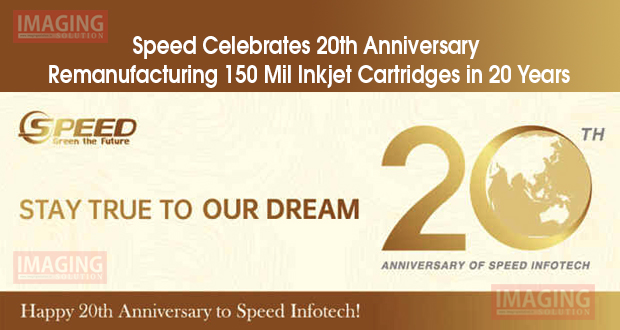 Speed Infotech Holdings Limited (Speed) celebrated its 20-year anniversary on May 16, 2021. Speed was founded in 2001 as a pioneer in remanufactured inkjet cartridges and started production in 2003 in Shanghai. Speed has remanufactured 150 million inkjet cartridges in 7,305 days which has been attributed to the relentless dedication of Young, Zhao, Lee, Speed colleagues, and partners. The company took just five years to become a leading inkjet remanufacturer in China. In 2013, Speed relocated from Shanghai to Beihai. Then, in 2015, the remanufacturer was the first to gain a license to import used inkjet empty cartridges into China—setting a new standard within the Chinese industry. May 16 is considered by the company to be a day to reflect on the past, to thank ordinary people who create miracles, and to remain focused on the company’s dream.