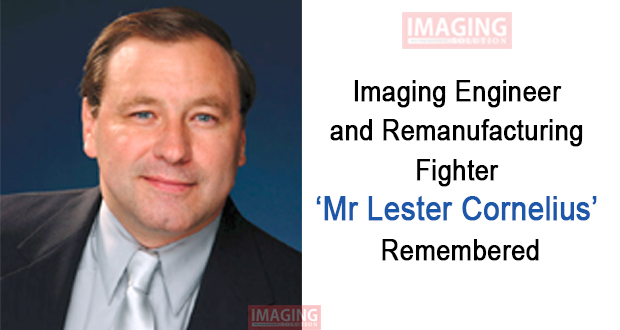 Mr. Lester Cornelius met N.Y. Assemblyman (now U.S. Congressman) Mr. Joe Morelle.  The two men worked together for the rest of Cornelius’ life to keep the aftermarket safe in New York, and procurement policies honest there as well. Mr. Cornelius led the anti-probate fight across the country and beyond. He was also instrumental in founding the industry’s North American trade association, the International Imaging Technology Council for which he was its first Chairman. Mr. Cornelius also served as President of the Remanufacturing Industries Council, and founding chairman of STMC (the Standardized Test Methods Committee). For the latter, he wrote the STMC Guide, which is still used today around the globe. He devoted countless hours to industry advocacy and leadership. The company he had founded, OTC, produced unique protective coatings for plastics, particularly eyewear used in sports and the military.  In the mid-90s, Cornelius was approached about developing coatings for components used in printing, and he developed coatings for blades, OPC drums, and other imaging components. In the 1990s, one of his coatings was licensed by Kodak for use in its high-speed copier technology.

Once he had studied the cartridge remanufacturing industry, Cornelius began sharing his findings with its members.  He wrote hundreds of articles for Recharger Magazine, Imaging Spectrum, and other industry publications.  He led dozens of seminars at World Expo and association meetings around the globe. He always wanted to make the industry the best it could be and selflessly shared his work product. He moved his products and his leadership to Remanufacturing Technologies Corp (RTC) in Las Vegas, Nevada.  He was active in developing new products and industry advocacy until his death in 2011.