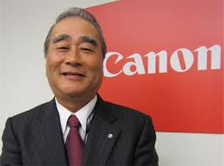 Canon U.S.A., Inc. announced the appointment of Joe Adachi as the company’s new Chairman and CEO effective today. Since 2005, Adachi has been serving as President and CEO of Canon U.S.A., overseeing Canon’s operations in the Americas, and will maintain his current responsibilities as CEO.

In addition, Yuichi Ishizuka has been named President and COO of Canon U.S.A. In his new position, Ishizuka will be involved in the management of new business projects while continuing his current responsibilities as executive vice president and general manager for the Imaging Technologies & Communications Group, where he oversees the camera, video and inkjet printer groups. “I look forward to my new assignment as President and COO of Canon U.S.A.,” said Ishizuka.

“ Adachi has a strong vision for our company’s future and I am honored to work together with him to take Canon to the next level.” Adachi joined Canon Inc. in Japan in 1970 and worked at Canon U.S.A. from 1978 to 1992. He returned back to Canon Inc., and in 1993 was named General Manager of the Photo Products Marketing Management Division.

In 1998, Adachi was named President of Canon Canada, and in 2001, was appointed President and CEO of Canon China and Canon Hong Kong, as well as Chairman of Canon Singapore. In 2005, Adachi returned to Canon U.S.A. as President and CEO. In 2013, in addition to his current position, was appointed Chairman and CEO of Canon Solutions America, Inc., a wholly owned subsidiary of Canon U.S.A. that provides direct sales and service for all Canon and Océ office and printing offerings in the United States.