written by Imaging Solution Bureau May 14, 2020 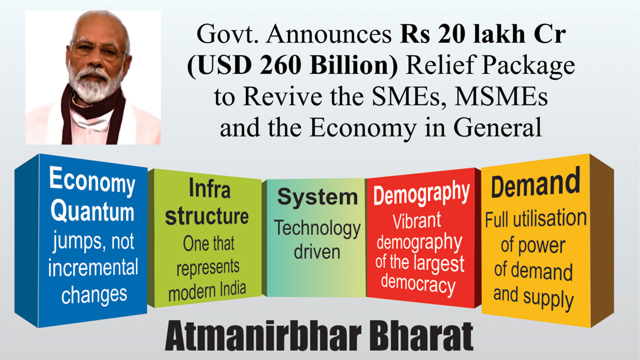 Announcing relief for MSME sector as part of Rs 20 lakh crore (USD 40 Billion) stimulus to tide over coronavirus crisis and boost the economy, Finance Minister Nirmala Sitharaman announced Rs 3 lakh crore collateral-free automatic loan saying it will benefit 45 lakh small businesses. The loan will have a four-year tenure and also a 12-month moratorium in repayment. Sitharaman also announced Rs 20,000 crore (USD 2.6 Billion) subordinated debt for stressed MSMEs which would cover 2 lakh businesses. The smaller firms, however, expressed disappointment and said that they were expecting salary support for their workers and staff in the absence of cash flow which is expected to remain minimal as orders have dried up and demands plummeted.

The mega Rs 20 lakh crore stimulus package includes measures to save the lockdown-battered economy and focuses on tax breaks for small businesses as well as incentives for domestic manufacturing. The combined package works out to roughly 10% of the GDP, making it among the most substantial in the world after the financial packages announced by the USA, which is 13%% of its GDP, and by Japan, which is over 21% of its GDP.

The Rs 20 lakh crore  (USD 260 Billion)  package includes Rs 1.7 lakh crore (USD 22 Billion) package of free foodgrains to the poor and cash to poor women and elderly, announced in March, as well as the Reserve Bank’s liquidity measures and interest rate cuts. Most economic activity in the country had come to a standstill after the government imposed a 21-day nationwide lockdown beginning March 25 to check the spread of coronavirus. The package will focus on land, labor, liquidity, and laws. It will cater to various sections, including the cottage industry, MSMEs, laborers, middle class, and industries.

Proposals such as giving full tax exemption to companies making a new investment of a minimum threshold in sectors such as medical devices, electronics, telecom equipment, and capital goods were said to be under consideration of the government. Investments in infrastructure are may also form part of the package. Easy access to land as well as labor reforms may also form part of the package to lure companies leaving China. The package is seen as a government attempt to check the world’s fifth-largest economy hurtling towards its first full-year contraction in four decades.

In spite of disappointment in certain sectors, overall the sector is expected to boost the economy has helped to revive the growth. As the economy revives, we can see soon MNCs from Taiwan, USA, etc restart their business relations and expand operations in India. Also, with labor charges increasing in China, now companies from Japan, South Korea, Taiwan, USA, etc are looking towards India, driven by Make in India, as an alternative international manufacturing base.

Bhagawati Enterprises is a Growing Wholesaler of Imaging...