GST Continues to Drive the Demand for Printers: IDC India 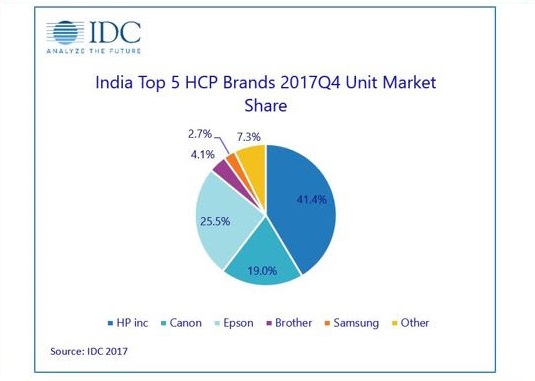 Japanese brands have strengthened their position in the Indian market. Three out of top five performers are Japanese companies, capturing almost half of the India market (48.6 Percent). US based brand(s), followed with 41.4 percent market share, a slight dip from 41.9 percent in 2017 Q3.

HP Inc. remained the overall market leader in HCP with a share of 41.4 percent and a 11.8 percent YoY growth. The Laser HCP (Printer-based) market, similar to 2017 Q3, remains dominated by HP with a 54.2 percent unit market share. It maintained its 2nd position from Q3 in the inkjet market with a market share of 37.6 percent.

Epson retained its first position in Inkjet with a unit share of 45.1 percent and unit shipments totalling to 187,019 units. It also witnessed a 28.3 percent YoY growth in Inkjet shipments, primarily due to the growth of its M-series models. Epson’s deep channel penetration and focus on the home segment are the key factors contributing to its market leadership in the inkjet category.

Canon too had a good quarter with an overall growth of 25.3 percent YoY. Laser printers leads the way clocking a YoY growth of 18.8 percent on the back of strong push by Canon in the Copier market, especially in the colour segment. It retained its number one position in the copier market with 33.4 percent unit market share as a result of its strong sales through its direct channel to large enterprises. In the Inkjet market Canon saw one of the best YoY growth of 36.8 percent compared to other vendors largely due to strong channel and market push.