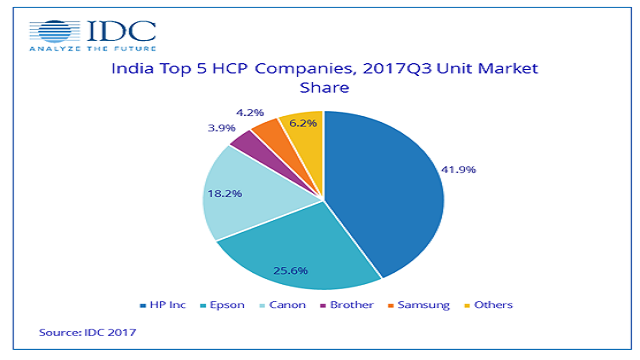 “Q3 2017 was anticipated to be better versus Q2 2017 because of the Diwali festive season. Despite a higher tax slab of 28% on multi-function printers, accounting governance created by the Government of India which requires businesses to maintain copies of electronic invoices to claim GST refund, largely contributed to the market growth. Several rounds of online festivals and sales by eTailers in the month of August and September also played a part in the robust growth in the consumer demand in printer category,” says Abhishek Mukherjee, Senior Market Analyst, IPDS, IDC India.

HP Inc. remained the overall market leader in HCP with a share of 41.9 percent with a 19.9 percent YoY growth and 39.8 percent QoQ growth. However, HP lost its top position in Inkjet market to Epson owing to latter’s strong ink tank portfolio and ended 2017Q3 with a unit share of 37.6 percent. HP Inc. continues to be the market leader in laser HCP (Printer-based) market with 54.7 percent market share.

Epson regained the first position in Inkjet with a unit share of 43.6 percent and unit shipments totalling to 252,784 units. As expected, Epson rebounded from a slightly weaker Q2 to deliver a massive 126.6% QoQ growth in Q3 in the inkjet market. Epson successfully capitalised on the demand in the SME and retail space with strong media push through new television advertisements.

Epson deep penetration in smaller cities such as Agra, Patna where demand for ink tank printers outpaced than some big cities like Bangalore, Chennai also helped them propel to first spot in Inkjet market

Canon too had a strong quarter with Inkjet leading the way clocking a QoQ growth of 62.4 percent on the back of strong push of ink tank models in the retail with extra bottles of black ink. Canon ink tank models registered a YoY growth of 35.9 percent. It also retained its number one position in the copier market with 26.2 percent market share on the back of strong sales through its direct channel to large enterprises. Copier based MFPs are in the verge of paradigm shift with enterprises preferring to work directly with print vendors instead of indirect channel.

“Market is expected to stabilize in 2017Q4, after a strong Q32017 with demand surge due to GST. The drop in GST slab for MFPs and cartridges from 28 percent to 18 percent effective 15th November, may not have impact on overall volumes but can result in end users preferring multi-function printers over single function printers. On the commercial side as well, good demand is expected from SMBs, large corporate and enterprises, however this will be offset by declining government business due to changes in the government procurement system, such that there’s a shift from direct government purchases to third party contractors,” says Nishant Bansal, Research Manager, IPDS, IDC India.