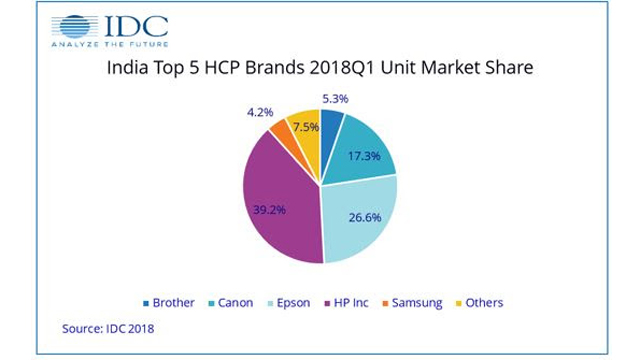 “Q1 traditionally sees strong demand from government and 2018Q1 was no different with the demand majorly coming from the Education segment through Government. Although the volume of Government contracts has decreased, the frequency of orders has increased significantly. The demand for original copiers has increased due to Government clamp down on the reconditioned copier market by seizing shipments and cancelling licenses of distributors dealing in such products,” says Bani Johri, Market Analyst, IPDS, IDC India

HP Inc. maintained its position as the overall market leader in HCP with a share of 39.2 percent and a 3.3 percent year on year growth. The launch of 6 new laser models, high traction for entry level Laser segment and end user focused promotions helped HP Inc increase its dominance in the Laser HCP (Printer-based) market by 2.9 percent over 2017Q4.

“Print security related concerns and need for digitization will result in strong demand for laser copiers across verticals. However, vendors will be under stress on account of Rupee depreciation and might be forced to relook at the prices,” says Nishant Bansal, Research Manager, IPDS, IDC India.