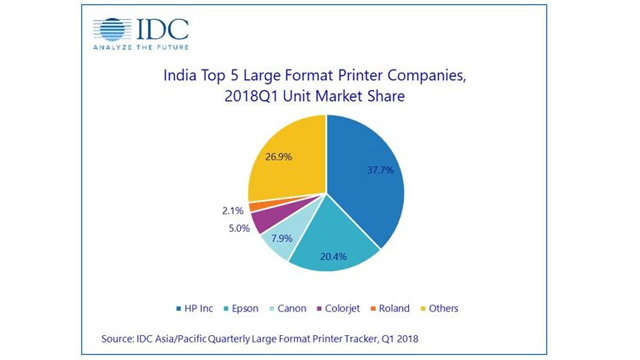 The large format printer (LFP) market in India grew 11.7% quarter-on-quarter and 38.5% year on year in Q1 2018, with shipments reaching at 2,954 units, according to the IDC Asia/Pacific Quarterly Large Format Printer Tracker, 2018Q1.

Shipments in the large format CAD/Technical printer market segment grew 17.7% quarter-on-quarter and 55.2% year-on-year, driven by strong growth in single-pass CAD inkjet printers in the large format aqueous-based printer segment. On the other hand, shipments on the graphics side were up by 7.6% quarter-on-quarter and 28.3% year-on-year. Though solvent printers dominate the total graphics market but aqueous, UV and Latex were key driver of this growth.

Demonetization, GSTs and RERA have affected the real estate market in 2017. As market is stabilizing in 2018 and further government has announced various infrastructure projects, this has fueled shipment of CAD printers in India. HP remained market leader with unit market share of 68.5%, followed by Canon and Epson.

“With the growing environmental concerns, new media and increasing applications graphics market in India is moving towards environment friendly products even if they are priced high. This quarter witnessed more installation of UV and other high end LFPs as compare to previous quarters,” says Pankaj Chawla, Research Manager, IPDS, IDC.