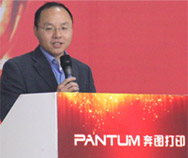 Recently, Ninestar Image successfully held the 2014 summative meeting. This meeting summarized the achievement Ninestar has got in 2014, and it also made a strategic plan of year 2015. Jackson Wang, the chairman & CEO of Zhuhai Seine Technology Co., Ltd and Eric Zhang, the Vice-General Manager of Ninestar Image attended the meeting and gave important speeches.

During last year, Ninestar achieved good results in every project, of which ribbon exceeded the annual target and ink cartridges reached a growth rate of more than 5% while toner cartridges’ growth rate is higher than the market average, therefore improved its worldwide market share to a new level. There is also breakthrough on patent development, for example, Ninestar be the only one developed totally circumvention patented toner cartridges of Lexmark 510/810 series products etc. Mr. Jackson Wangemphasized that, in year 2015, Ninestar will consist on patent development as well as improving user’s printing performance.

In year 2015, Ninestar is aim to maintain the leading position of patent technology & quality cartridges, and standardize the production process during manufacturing to increase the capacity as well as stabilizing the quality. On the other hand, Ninestar is going to adjust its marketing strategy through re-subdividing the market, which is expected to make the marketing management more reasonable and effective. Eric Zhangis confident that Ninestar will keep leading in the market, and obtain more achievements in patent technology and product quality.