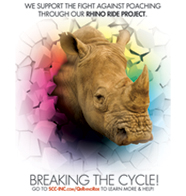 Static Control will be sponsoring the upcoming 2014 Rhino Ride, a two-day bike ride through the Zululand Rhino Reserve in KwaZulu-Natal, on August 30. The eight-member team, four of which are Static Control employees, will cycle more than 70 kilometers throughout the private nature reserve which is home to many rhinoceroses and other endangered species.

“As a company that believes in helping the environment, how could we not support the rhino?” said Stuart Lacey, International Sales Director for Static Control. “In Africa, the rhino is a symbol of conservation and we aim to raise awareness of this tragedy that is taking place daily in our country.”  Rhino poaching is a significant problem in South Africa, which is home to 83% of Africa’s rhinos and 73% of all wild rhinos worldwide. The poaching is predominantly driven by illegal trade in rhino horn to Asian countries, mainly China and Vietnam. In 2013, there were more than 1,000 cases recorded of rhino poaching, despite law enforcement officials strengthening laws and increasing penalties to protect the remaining population.

“Static Control spends a great deal in resources to ensure our products have a positive impact on the environment,” said Lacey. “It is only natural for us to extend our eco-friendly message to this cause, which is close to our hearts in South Africa.” Along with Lacey, Unit Business Managers Grant Parker and Anton Swart and Sales Executive Francois Erasmus will ride on Static Control’s team. All proceeds from the Rhino Ride will be donated to the Zululand Rhino Reserve Foundation, an endangered species reserve that funds many ongoing conservation projects involving rhinos and other species.