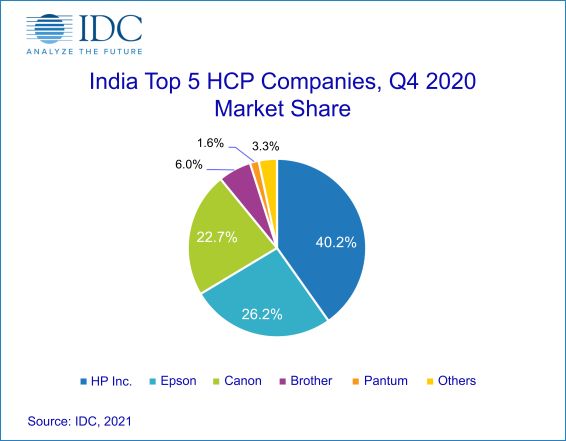 Indian Hardcopy Peripherals (HCP) market recorded its best Q4 to date in terms of unit shipments. As the country opened further during the festival season and vendors partially resolved their supply issues following a global surge in demand, India’s HCP market witnessed a growth of 4.0% quarter-over-quarter (QoQ) during 4Q20 (Oct-Dec 2020). The market registered shipments of 0.95 million units during the quarter posting a growth of 19.7% year-over-year (YoY), according to the latest IDC Worldwide Quarterly Hardcopy Peripherals Tracker, 4Q20.

In the inkjet segment, vendors continued to face supply challenges during the beginning of the quarter. However, the situation improved as the manufacturing hubs in China and Southeast Asian countries increased their capacity to meet the global surge in demand for inkjet printers from the Home segment. Following this, the inkjet segment noted a YoY growth of 38.8%. Within inkjet printers, the ink tank printer segment grew steadily following improved availability and the pent-up consumer demand owing to continued work from home and e-learning for students.

The laser printers’ segment (including copiers) recorded a YoY growth of 3.8% at the back of laser printers (excluding copiers) as multiple delayed orders from the previous few quarters were executed in 4Q20. The laser copier segment, however, witnessed a YoY decline of 27.5% following muted demand from Corporates.
Full Year Highlights:

For the CY2020 (Jan-Dec 2020), the overall HCP market declined by 19.1% mainly due to the laser segment (including copiers) which declined by 28.5%, following the commercial market’s struggle to resume operations during the COVID-19 crisis. The laser copier market dropped by 44.9% owing to weak corporate and Government demand. The inkjet market declined by 9.2%, due to the surge in demand from the Home segment. CY2020 observed high demand for Wi-Fi and ink tank printers which could be met partially as vendors struggled to furnish enough stock.

HP Inc. (excluding Samsung) maintained its leadership in the overall HCP market with a share of 40.2% and a growth in shipment of 22.1% YoY. The growth was primarily led by the inkjet segment wherein HP grew by 51.7% YoY and captured a market share of 33.8%, occupying the 2nd position, as it smoothened its supply and logistics issues to cater to the increased demand.
Epson replaced Canon to occupy the 2nd position in the overall HCP market with a market share of 26.2% while registering a YoY growth of 14.9%. In the inkjet segment, Epson replaced HP to regain its top position in the market with a share of 41.1%. This comes primarily at the back of Epson having resolved the supply issues it was facing previously in 3Q20.

Canon recorded a YoY growth of 34.6% and occupied the 3rd position in the overall India HCP market, capturing a unit market share of 22.7%. In the inkjet segment, Canon observed a YoY growth of 63.9% at the back of its increased online presence and lucrative end-user schemes. In the laser segment (including laser copiers) Canon maintained its 2nd position with a market share of 25.0% with a heavy dependency on entry-level mono printers, primarily LBP 2900B. In the laser copier segment, although Canon declined by 33.3% YoY, yet it continued to lead the copier market with a 32.6% market share because of its wide product portfolio and a strong foothold in the corporate segment.

“In the commercial segment, the demand situation improved from a QoQ perspective as certain segments, primarily jobbers and SMBs/SOHOs, resumed full-time operations. However, demand from large corporates continued to be muted as the offices remain closed. 4Q20 witnessed increased activity from the Government as it released several tenders following directives from Ministry of Finance to other ministers and public sector enterprises to exhaust their planned budget for capital expenditure (CAPEX),” says Bani Johri, Market Analyst, IPDS, IDC India. 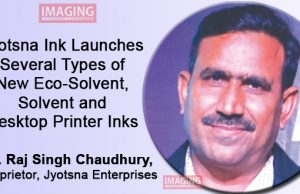 UNO Print Aims to be No. 1 Provider of Imaging Consumables...