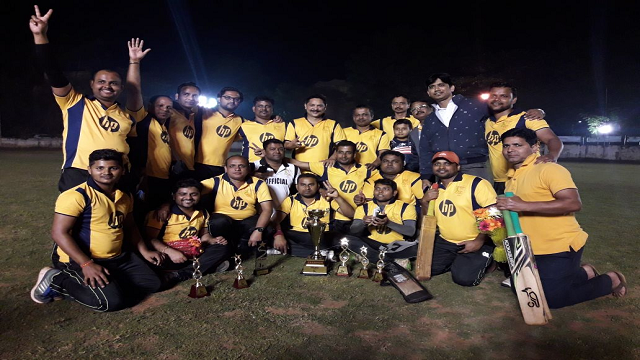 In continuation of ITAO’s every year cricket IT Premier league tournament, this year too ITAO ITPL 2017 was organized at Sahid Sporting Ground, Bhubaneswar. All the leading ITAO organization owners, staffs and top IT industry Brands were involved along with their staffs. 5 teams were playing sponsored by LENOVO, SUPERTRON, HP, ASUS and EPSON. Associate sponsors were DLINK,AOC, QUICKHEAL, CP PLUS, AQUASUDH. The Supporting Sponsors were LG, DIGISOL,SOPHOS, K7, PRINTLINK and Bawarchiten11.com. Two days of scintillating and funfilled criket was played by all teams on 16 & 17 December 2017.

All the teams played with each other in leagues, ASUS and HP went to the Final of the ITPL 2017. Both teams played brilliant cricket enjoyed Senior members of ITAO along with Young brigades of ITAO with family.  In a thrilling Day n Night Final match ASUS made 79 in 12 overs with some tight bowling by HP team. HP made the required runs in 11th Over and own the match. Throughout the tournament HP’s Abhinash Patnaik (Gopu), Suvendu Patra  and Alok Mohanty along with Girija Barik, Abhinash Rout and Mrutunjay Dwibedi played brilliantly to win maximum league matches.  Man of the Match awards by HP’s Alok Mohanty bagging 2, Suvendu Patra bagging 1 in leagues and Abhinash Rout bagging the Man of the Match award in Final by taking 3 crucial wickets.  Suvendu Patra awarded for maximum Sixes award in the Final.

The award ceremony was attended by many ITAO senior members and Sponsor’s Staff who gave away the awards and trophies. Everyone thanked the organizing team of ITAO ITPL 2017.