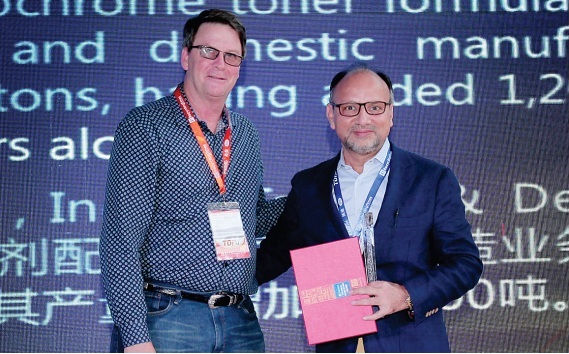 Indian Toners & Developers (ITDL), which is celebrating its 25th year in business, has picked up the coveted Outstanding Marketing Award in Zhuhai, China.

Founder and Chairman Sushil Jain accepted the global imaging industry award in front of hundreds of imaging industry professionals and leaders from 104 countries, Chinese government officials and the media.

Thousands of nominations were received for the twelve categories of awards, presided over by 15 judges from 12 countries. Jain established ITDL in India 25 years ago as the first Aftermarket toner company and in spite of being in a tough, hard fought, price driven market it continues to be the undisputed market leader thanks to strong leadership and clever marketing skills. He incorporated ITDL in 1990 as a public limited company on the Bombay Stock Exchange —at the age of 33.

RT Media picked up the global industry awards when it acquired US-based Recharger Magazine in 2014. The Outstanding Marketing Award is presented annually to the company, organization or individual that has run a memorable or unique campaign to the market that promotes the benefits of using aftermarket imaging supplies, products and services.

Indian Toners & Developers was presented the award for celebrating its 25th year after successfully developing its own monochrome toner formulations and growing its international and domestic manufacturing business to 3,600 metric tons, having added 1,200 metric tons in the last three years alone. The RT Imaging Awards were presented during the RemaxWorld Expo which broke all records again this year with 482 exhibitors from 28 countries and regions, and 15,122 professional visitors from 104 countries and regions. The event has been running each year for 11 years